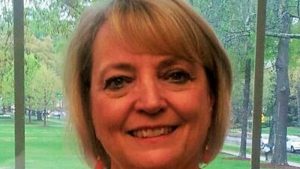 Marilyn Stephens is a native of Childersburg, Alabama, but has lived in Tuscaloosa for the past 36 years. Marilyn received her B.S. degree from the University of Montevallo in 1974 with a double major in biology and chemistry. After obtaining her B.S. degree she continued her education and obtained her Medical Technology (ASCP) certification. Upon moving to Tuscaloosa, she worked as a supervisor in the lab at Druid City Hospital and began working on a Master’s degree in microbiology at the University of Alabama. During that time, she began the process of teacher certification in biology and chemistry. After she became a certified teacher she began her teaching career at Tuscaloosa County High School in 1980 where she taught chemistry, anatomy and physiology, biology, AP biology and environmental science. While teaching at TCHS she continued her education and received her Master’s in Education in 1983. In 1989 and 1990 she taught at the University through the TI-IN network as a distance education instructor via satellite to over 200 students across the United States. In 1991 she obtained her AA certification in science education and began working on a Ph.D. in the areas of curriculum and instruction and educational research. Leaving the doctoral program in 1994, she continued to teach at Central High School East as the AP/IB chemistry teacher, Hillcrest High School as the AP Biology, physical science and environmental science teacher and ended her teaching career spending the last 10 years at Northridge High School as the AP Biology and AP Chemistry teacher. Marilyn obtained her National Board Certification in Science in 2006. After 34 years of teaching she retired in May of 2013 and re-entered the doctoral program as a graduate research assistant for Dr. Dennis Sunal and the UA Noyce Scholars grant. During her career as a classroom teacher she won numerous awards such as the Tuscaloosa County Teacher of the Year, Jaycee Outstanding Young Educator, Tuscaloosa City Teacher of the Year, Alabama Conservation Education Teacher of the Year, 2011 Alabama Chemistry Teacher of the year, and NMSI (National Math & Science Initiative) Top Ten Teacher. She recently won the 2013-2014 award for “Outstanding Graduate Student in Science Education” at The University of Alabama.

The University of Alabama, part of The University of Alabama System, is the state’s flagship university. UA shapes a better world through its teaching, research and service. With a global reputation for excellence, UA provides an inclusive, forward-thinking environment and nearly 200 degree programs on a beautiful, student-centered campus. A leader in cutting-edge research, UA advances discovery, creative inquiry and knowledge through more than 30 research centers. As the state’s largest higher education institution, UA drives economic growth in Alabama and beyond.