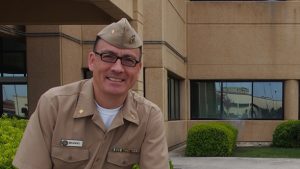 Lieutenant Commander Melendez, a native of Dana Point, California, earned a Master of Science in Nursing from The University of Alabama. He is currently enrolled in the Doctor of Nursing Practice program. Prior to attending The University of Alabama, Lieutenant Commander Melendez graduated from the University of Southern California with a Bachelor of Arts, the University of Rhode Island with a Bachelor’s in Nursing, and the University of Oklahoma with a Master’s degree. Lieutenant Commander Melendez enlisted in the Navy in 1990. He earned a commission into the Nurse Corps under the Medical Enlisted Commissioning Program in 1997 at the Naval Hospital Groton, and completed Officer Indoctrination School in Newport, Rhode Island. Lieutenant Commander Melendez’s awards include four Navy Commendation medals and three Navy Achievement medals, along with several unit citations. He has served as an officer in multiple locations, including the Naval Hospital Camp Pendleton, Naval Health Clinic Hawai’i, Naval Hospital Naples, and the Naval Medical Center Portsmouth. He has functioned in a number of leadership and clinical nursing roles including Chair of Command Infection Control, Medical Programs Officer, Chair of Nursing Professional Practice Committee, Chair of the Executive Committee of the Nursing Staff, Associate Director for Nursing Services, Department Head of the Multi-Service Ward, Clinical Coordinator of the Joint Commission ORYX measures, and as Command Medical Inspector General. Melendez was recently selected as the Head of the Inpatient Maternal Infant Department for the Department of Defense’s largest Labor & Delivery Center. Melendez is a certified PeriOperative Nurse and an active member of the Association of Peri-Operative Registered Nurses. He has served on the Board of Directors for AORN Hawai’i and South Bay California and was selected as a three-time national congress delegate. He is certified as a Surgical Services Manager, Board Certified as an Advanced Nurse Executive, and is a Certified Clinical Nurse Leader. He has been inducted into Sigma Theta Tau, the International Nursing Honor Society and is active in the American College of Healthcare Executives. Lieutenant Commander Melendez is married to his wife of twenty-two years, Alicia, and has three children, Luca (18) a Virginia Military Institute Cadet, Isabela (17), and Andreas (12).