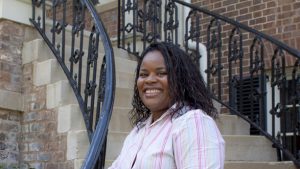 Jean Swindle originally hails from Sumter, South Carolina, but is a permanent resident of Asuncion, Paraguay, where her last position was as principal of a bilingual K-12 school.  She holds a BA in Business Administration with a minor in Spanish from Coker College (Hartsville, SC) and completed her Master’s in Secondary Education through UA’s College of Education International Program in Asuncion.  She started her professional career with the US government and had served in a diplomatic capacity before leaving government service to embark on a life in South America in the field of education. She is in her last year as a Ph.D. student in Educational Leadership, Policy, and Technology Studies with a concentration on Social and Cultural Foundations. She is a former McNair Fellow (2011-2013), Holmes Scholar (2012-2013), and UCEA Jackson Scholar (2013-2015). She serves as a graduate teaching assistant, a Graduate Ambassador (2011-present), Tide Together Peer Mentor (2013-present), and graduate teaching assistant for the College of Education. She is also the 2014 recipient of the Elizabeth Meese Award in Feminist Research. Among her many other responsibilities Jean serves as the president of The University of Alabama Graduate Student Association. Her principle research interests are in transnational identities and how they disrupt multicultural discourses in national schooling, specifically, and education, in general, and the role of language ideologies in teacher beliefs about child migrants. While pursuing her Ph.D., Jean has been able to continue serving in areas she is passionate about – teaching and international education. She has been the in situ instructor in Granada, Nicaragua (2013-2015), for the Honor’s College Nicaraguan Clinical Experience and serves on accreditation teams in Latin America for the Association of Christian Schools International. Each semester, she has the privilege of instructing pre-service teachers in the College of Education and counts this experience with burgeoning educators among one of her most rewarding at the University of Alabama.