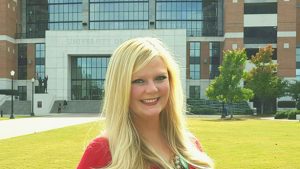 A native Alabamian, Hylan Noble is a graduate student in the Department of Communicative Disorders. After graduating with a Bachelor of Arts Degree in Psychology from The University of Alabama, she moved to Nashville, Tennessee to work as a Research Coordinator and Clinician at the Vanderbilt University Treatment and Research Institute for Autism Spectrum Disorders. For five years, she completed intensive training in Autism including diagnostic tests, intervention methods, and research protocols, before returning to The University of Alabama to pursue her M.S. in the Department of Communicative Disorders. Hylan’s interest in autism began in her undergraduate work when she completed an honor’s thesis on language learning in children with autism under the mentorship of Dr. Laura Klinger. When Hylan returned to UA, she continued her commitment to autism research by conducting a graduate thesis on parent-mediated intervention in toddlers with autism under the direction of Dr. Angela Barber. Hylan’s primary research interests focus on facilitating effective parent-child interactions to foster improved social communication, play, and language in young children newly diagnosed with autism. Her thesis research was accepted for presentation at the 2015 American Speech Language Hearing National Conference. During her graduate studies, Hylan also served as a mentor for the UA-ACTS College Transition program for college students with autism and as a diagnostic clinician at the UA Autism Spectrum Disorders Clinic. She also serves as a graduate assistant for the Department of Communicative Disorders. Hylan is a former fellow for the Blackburn Institute (2008-2009), Arts and Sciences Ambassador (2005-2008), Winner of the Significant Contribution to Research Award (2008), Most Outstanding Senior Award (2009), and Athletic Hostess (2005-2008). In addition to autism, as a part of her clinical graduate training, Hylan trained in various aspects of communication and swallowing disorders with individuals who have Aphasia, Parkinson’s Disease, Traumatic Brain Injury, Cerebral Palsy, among others. Upon graduating, Hylan plans to pursue her passion of helping children and adults with autism and other communication deficits through research and clinical work.