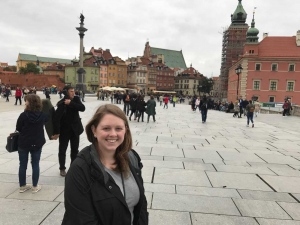 Graduate student Kathryn Cater chose The University of Alabama for both undergraduate and graduate study. She began working toward her master’s degree during her senior year as part of the University Scholars program. Cater, a recent Fulbright Scholar, shared what made her year of enhanced research special.

Where are you now in your studies and research?

I have graduated with my masters of science after completing my degree requirements and finalizing my thesis with the research from my Fulbright study abroad. My thesis’ focus is investigating staphylococcal bacteria phages. I’ve had several different projects at UA and in Poland. My projects at UA were hoping to expand the knowledge about staphylococcal epidermis phages while my focus in Poland was on using bacteria phages to treat antibiotic-resistant infections. So in Alabama, I was doing the groundwork for the clinical research I was going to be doing in Poland.

How did The University of Alabama support your Fulbright candidacy?

UA was extremely supportive during the whole Fulbright application process. I can tell why we have so many Fulbright scholars. I was a late applicant in the cycle, because I decided I wanted to apply in the summer, which was later than most people. As soon as I expressed interest, the study abroad office and Dr. Beverly Hauck began helping me prepare to be a strong candidate. The application process was actually just a personal statement and a resume and it wasn’t too extensive, but as a researcher, I had to find a mentor in Poland to support my application. I began reaching out and eventually got in touch with Professor Gorski, who himself was a Fulbright to the U.S. from Poland. He was willing to host me at the Institute of Immunology and Experimental Therapy, The Polish Academy of Sciences and became my mentor.

My Fulbright experience was one of the most enriching times of my life. I was able to make friends with other Fulbright Scholars and Polish people. I was able to experience and really live in a new environment. Also, the research aspect was really thrilling for me. It was more clinical than what I was doing at The University of Alabama, which was one of the reasons I wanted to be a Fulbright. At the Institute, they’ve been doing bacteria phage therapy for about 80 years, since before antibiotics were really even popular. I was able to learn their methods, and as antibiotic resistance is growing, I’m hoping I can bring what I’ve learned back to the U.S. We’re running out of options to treat antibiotic-resistant infections.

What else has been beneficial about your time at UA?

One thing I really enjoyed at UA was being a medical scribe for the University Medical Center. I would go into the room with a physician and enter notes into the electronic medical record so they could see more patients more quickly. I was able to work with a few physicians in family practice, pediatrics and gynecology, and that opened my eyes to the role of medicine. It made me more interested in the clinical aspects of medicine, and it’s why I’m interested in going to medical school, becoming a medical researcher and having the patient-doctor interaction. It also sparked an interest for me in gynecology. I’m interested in the STI/STD epidemic in the U.S. There’s been a lot of resistance to gonorrhea, and I am interested in the potential for bacteria phage therapy there.

Why was UA the right choice for you?

When I was first thinking of undergraduate schools, I had never thought of UA as a place for research until I visited. Once I visited and toured the facilities, I realized they really were research-focused. After having so many opportunities, and with UA being so supportive in everything I’ve tried to do, it’s been a really great place. They are always supportive in whatever research or academic path you want to take.

What role has UA’s faculty played in your success?

I would like to thank my graduate mentor, Dr. Hatoun. I definitely wouldn’t be where I am without her guidance and support. She’s the one who initially sparked my interest in bacteria phages. She’s a newer professor and has a very hands on approach with mentoring. She’s always available to help, especially when you have questions in the lab. I was an undergraduate researcher, but it’s different as a grad student, because you have to plan your experiments. She was always available if I needed help or had questions about things.

What’s next for you?

My next goal is medical school. I’d like to see myself working with bacteria phages in the future, maybe in San Diego or elsewhere in the U.S. I’m really interested in infectious diseases, so something along the lines of what I’m doing now is what I’m passionate about.